Remote Coworking and Gratitude for Technology 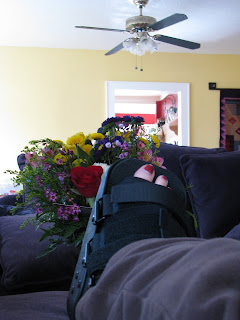 The view from here.
It is often the unexpected that makes us take stock of things. Last week, I broke my ankle. Right, not exactly in the plan. Since then, I have noticed and been thankful for a number of things.
Although it means that driving and walking are out of the question for the moment, two working arms and access to technology has allowed me to keep working, from my couch, foot hoisted in the air to reduce swelling.
What I'm finding most comforting is the friends that actually feel nearby. A simple change to my "status" in my Gmail and my facebook accounts and many of my friends now know what's up with my life and what's important. It's a feature I sometimes find mundane, but have recently found more interesting as both I and my friends use the feature more regularly. The couch just doesn't feel as isolated with those little green dots next to my friends on gmail. Friends in Atlanta, Portland, Chicago and San Francisco are just a button click away. Even if we never "talk" via email or IM, I think of them and somehow feel closer by the mere presence of their name and their little green dot. In the morning I see a colleague in the UK, and friends on the east coast log in. As the day goes by, those on the west coast become more active. Later at night, we get to see who the real geeks are (present company included) by who's online late at night.
Facebook, though the applications are way too vast for my taste, also brings a closeness to my own circle of friends at this time of some isolation.
I know these social networking opportunities have been around for awhile. Normally I prefer to meet my friends ITRW (in the real world), but for now, on my couch, alone, pumping ibuprofen every few hours, those little green dots sure do make me feel supported and surrounded by the important people in my life. :-)
Posted by Janna - Customer Experience Guru at 3:41 PM 1 comment:

Last week, I called AT&T/Cingular with a problem on my cellphone. The voicemail icon on the phone wouldn't go away even though I had no voicemail. It was a problem that was fairly easily remedied.
However, in the process of my call, I had a fascinating interaction. When the customer service agent said, "how can I help you today?" I responded by saying that the voicemail icon on my phone wouldn't turn off. "Icon" she said. What is that? She may have asked if it was the picture on the phone. I don't remember. What I remember is the curiousity surrounding the interaction with the customer service agent at a cell phone company who didn't know, at least not for sure, what an icon was. "Icon", I supposed, is a bit of a specialty word. Maybe more recognized by interaction designers and designers in general.
A quick google search shows 531,000,000 hits for the word "icon". Wikipedia has entries for both the religious and the computer pictogram types of icons. So how did AT&T manage to miss this in their customer service training? It's really not her fault, but one does wonder if/how these folks are trained and compensated to do what is rapidly becoming anything but a minimum wage job, working customer service for our increasingly complicated mobile technology.
And, as an afterthought, I have to ask. What IS that icon anyway? It looks a bit like an old cassette tape winding. Given that most of us have probably not used a cassette tape answering machine in at least 10 years, it is the designers job to work on a new image. Think digital, think people, think asynchronous communication, think voice. I'm no graphic designer, but perhaps this will spur someone to replace the archaic cassette with an icon, yes a picture, of voicemail for the digital age.
Posted by Janna - Customer Experience Guru at 9:50 AM No comments: 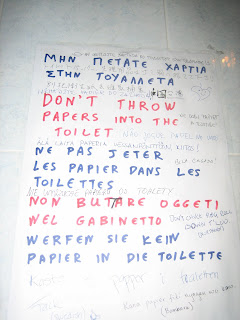 Continuing on the theme of bathrooms....I have a number of photos I've taken in bathrooms over the years. There are always interesting design and user experience moments hiding behind bathroom doors.
This one in particular was posted in a toilet in Greece. The fascinating user experience in this country is that they ask you to throw used toilet paper into a basket next to the toilet and flush only bio materials. I imagine this is best for the sewage systems. It's really important, yet unfamilar to westerners from both the US and Europe (and I imagine others, though I'm not as fluent in their bathroom habits).
Realizing the importance, but also wanting to put their country on the proverbial map, visitors from all over the world have attempted a service for their fellow travelers by translating this request into any number of languages. My favorite being "don't chuck the bog roll down the loo."
Posted by Janna - Customer Experience Guru at 6:04 PM No comments: 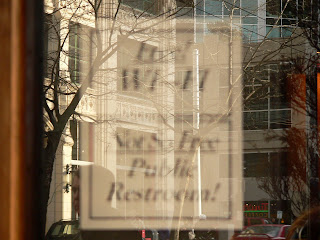 Free Wi-Fi. The siren's call to a weary traveller tracking their vacation on their trusty laptop, a worker in a strange city who needs to check in, or a consultant who simply needs a place with people around to work and "feel connected." Any coffee shop worth it's mocha offers this service nowadays.

Is the Wi-Fi really free? If I walked in with my laptop and sat down and started to work. Would anyone come over after a period of time and tell me that I must order a tea/non-fat, soy latte/muffin to continue to use their airwaves? Unfortunately, I didn't get to test this. If I have a laptop, does that I assume I am clean, have money and can then use the restroom? Does my laptop mean that I will treat everyone and everything I encounter with love and respect?

And, what exactly is it that makes establishments so very protective of their porcelain thrones? What great treasures lie in the bathrooms of so many establishments that I must pay for the privilege of using their restroom? Why must a weary traveler or shopping wanderer be restricted from releasing the much more urgent biological needs, but be allowed at any given moment to simply open up and log on?
Posted by Janna - Customer Experience Guru at 11:19 AM No comments:

A Declaration of Independence

In our lives, there is constant change. Buddhism reminds us that nothing is permanent. Too true. I had a job I can honestly say I loved. How lucky to ever be able to say that in one's life. I've had a few of them, actually. My department was downsized and I and others were sent off on new adventures. Working in Digital Health was exactly what I had hoped to do after returning to graduate school. The work encompassed healthcare and technology. At the end of the day, our work might actually make a difference and the work and environment was continually challenging and interesting. Now it's time for me to take that knowledge and work with other companies who have similar visions.

After leaving Intel, I have decided to delve back into the world of consulting. As you may know, my previous company, Accessible Threads, focused on creating sewn prototypes for consultancies such as IDEO and Herbst LaZar Bell, and manufacturers such as SunTech Medical and Trek Bikes.

In this new iteration, the focus will be on healthcare and technology, also encompassing projects that fall under “design for social change”. I will bring my expertise in user research, ethnography, concept generation and general design thinking to consultancies, manufacturers, and non-profits. When working with participants, I offer expertise with special communities such as elders, people with a disability and children.

Work with Ziba and Oregon Health and and Techtronix, has already gotten underway. I'm excited to see where this adventure goes. If you want to collaborate on a project as a client or as a partner in design crime, I'm at dezinr at gmail.com

Posted by Janna - Customer Experience Guru at 10:04 AM No comments:

I was with a colleague today returning from lunch when we passed a construction site on the road. We passed the usual gang of workers and the expected construction equipment. Just past this, we saw a man in an orange vest looking like he was "praying" or sitting in "child's pose" from yoga. (Really wish I had a camera...) We both stared and wondered what was going on. Upon closer inspection, we realized he was crouched on the ground writing some site notes in what looked like a most awkward position. Being people well versed in user experience, we marvelled at the fact that this man had not found the simplest of tools, a clipboard, to use in the field and help him do his job.
In retrospect, I wonder what would have helped. Can his tools be made digital? Is there a way he can carry a fold up writing surface on the job site? Should every construction horse have a fold out desk? We think often of mobile workers as those with cushy desk jobs who are out on the road, when in fact, many of our mobile workers are literally in the field every day, or on the streets or climbing lightpoles. What can we do to simplify the work of these ever mobile crews?
Posted by Janna - Customer Experience Guru at 9:53 PM No comments: