As the title says...this is a video of the game we created in the workshop.
Posted by Janna - Customer Experience Guru at 4:49 PM No comments: 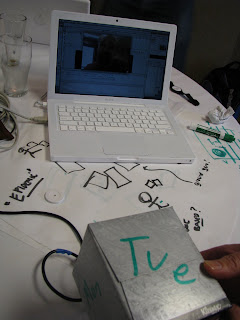 On Thursday, September 4, the Portland local CHIfoo (Computer Human Interaction Forum of Oregon) and IDSA (Indsutrial Designers Society of America) collaborated to bring Matt Cottam of Tellart to Portland for an evening lecture and a full day workshop.
Tellart was brought in to share the art of "sketching" for digital interfaces. As any designer knows, be it interface or furniture , it is important to start early and often with a physical prototype to get an idea to a space where you can discuss it, change it, and build on it and see if it "stands up" both literally and figuratively.
The projects they shared were great. They are the kinds of projects many of us dream about doing for either love or money, bridging the physical and digital worlds. The workshop was just like being back in graduate school and being given the chance to dream of anything, not worry about whether will it make the company the necessary million dollars, or if can you replicate it and make 10 million of them. It was an exercise in thought without boundaries.
They shared a wonderful array of digital sketch components, some of which I am familiar with or have used and others which are new. Arduino, Scratch, Phidgets, Basic Stamp and Easy I/O were suggested for quick mock ups along with interface software such as Flash. Other sites of interest included Making Things, Trossen Robotics, Buglabs, Ultimarc for pre-hacked keyboards and Sparkfun. 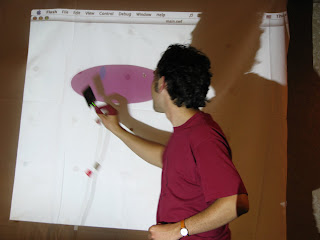 Our team used a grid of passive RFID tags placed behind a tablecloth and hung over a freestanding screen. Using an RFID reader, the game player was tasked with touching the "prey" so the Blob knew where to move. The Blob then ate the prey and was able to live to eat the next. The game was a combination of thoughts from game theory and a desire to have a game based on gesture and physicalization, moving away from the static computer screen. In just an afternoon we were able to brainstorm and build this game as a "sketch" to what could be.
The photo in the upper left shows another team's work where they pasted RFID tags to the inside of a Kleenex box and used it as a controller for a memory system. When you flipped to Tuesday, a short video diary came up with what you or a friend recorded on any given day. A Sprite bottle controlled the on/off and speed of the video.
Attendees had fun to be sure. The only disappointing part is that still can't go back to my project teams with an easy to use solution, or at least one that I've tried before, to make similar sketches. The hardware is easily attainable, the code we used was something special they use in-house and, sadly, I don't code Flash. It reminded me that it's still best to work with engineers, and software gurus but maybe I'll start spending my wee hours learning basic code to make digital sketches.

Posted by Janna - Customer Experience Guru at 12:59 PM No comments: