Long overdue overview of Day 2 of the conference


The talks for day two began with Tracy Zitzelberger from OHSU giving an overview of her team’s work. She discussed the idea of continuous assessment and using and elder’s progress as a point of comparison, and not comparing her progress to that of anyone else. The distinction is important since the research focus is on predicting impairment and decline which can be noted by changes in behavior caught by sensors in the environment (i.e, doors, keyboards, etc.)

Work on cognitive impairment and medication tracking by Tamara Hayes and her team was discussed. A portion of this work was done in conjunction with the Digital Health team at Intel during my tenure there. Papers on the subject can be found here, here and here. (Sorry, I realize you need to purchase these. If you are interested in papers on medication reminding, drop me a line and I can share our publications directly.)

For those interested in these subjects, a plethora of information can be found at ORCATECH and the on Aging.

Jonathan Cluts from Microsoft presented his team’s research on smart homes, looking 5-10 years into the future. He likened the work to concept cars. No, you can’t go out and purchase the technology today, but having a working demonstration helps both developers and potential end users engage with the technology, promoting conversations about the experience.

What caught my eye the most, having spent about 2.5 years looking at medication reminders, was their idea for medication tracking and reminding. The idea consisted of a ceiling mounted projector which projects onto a counter. The projector will prompt you to put a pill bottle under a camera at the right time to confirm which pills you are taking and then it prompts you to take out meds to confirm actual pills.

In the spirit of conversation, there seem to be a number of issues not considered in this scenario. The foremost issue in my mind is I don’t know anyone with 2 feet of unobstructed counter space in their kitchen on which to cleanly project something, especially elders living in small spaces. The device can assumedly project onto any flat surface, but again, a large unobstructed surface in a home is an anomaly rather than usual fare. It also assumes flat colored countertops. Simple black and white would be best for projection. The profusion of granite countertops (other than black) would likely render the projection useless with their bits of many colors not offering enough contrast for readability. The other conversation they need to revisit is that people, yes, even seniors, are very active. They are often not home at medication time. It would be important to add an override for medication taken outside the home.

What the device does offer that seems valuable based on my research, is that it allows a patient to keep their pills in the bottles from the pharmacy. This avoids the confusion of taking pills out of their pharmacy bottles and remembering how many and when to take them when filling a weekly reminder box. It also allows for easy medication change, again, it avoids undoing and re-doing the weekly or monthly meds box. Of course, the question there remains, who programs the device? Is there a remote programming option for a paid or unpaid caregiver? Do I need to go to the house to set up the system?

All in all, it’s a really nice next step into the complicated world of medication prompting, and quite different than many of the relatively “dumb” boxes being sold today. Definitely worth a continued pursuit.

Unfortunately, I’m not able to comment on the other speakers that afternoon since I was unable to attend the final afternoon sessions.

It’s a conference I would definitely attend again. The price was right and the information was valuable and varied. Thanks UW for continuing the conversation around the growing topic of elders and technology.

Posted by Janna - Customer Experience Guru at 5:19 PM No comments: 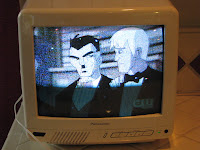 I still owe a day 2 download on the aging conference, but I've been distracted by consumerism lately. Gone, apparently, are the days when you walked into a store, there were 1 or 2 versions of a product and you decided then and there what to buy. I am now paralyzed by my fear of purchasing an inferior product.
First, it's time for a new computer. Honestly, I just want a red one. But, it also needs to run Photoshop, Illustrator, support multi-tasking, have bluetooth, ideally a webcam, be light enough for easy travel, and work fast enough to keep up with my oh so fast typing speeds (my current computer can't always do that...) And it needs to store a LOT of data and run large programs. So, off I go comparison shopping, Dell, Sony, Toshiba. Circuit City, Best Buy, Staples (never shop for a computer at Staples).
Back home to the Dell Outlet, Sony online, Toshiba. (Toshiba has a really great interface called the Laptop Finder to help you choose the best model for you, but each time I engage with it it selects something different. Hm.)
The purchase has been on my mind for months as my computer slows to a halt, but the options are brain numbing and my fear of making the wrong purchase has me making none at all. Then, it's time to get a TV converter box. The TV in my kitchen (keeps me company when preparing a meal or during a late night snack) does not have cable. My coupon arrived and a LIST of 49!! converter boxes that are eligible for use with the coupon. 49?! How complicated is this? Now the government in their infinite wisdom has created yet another mind boggling piece of technology that I must have in order to enjoy the company of David Letterman as I eat a late night bowl of cereal.
The issue is, what can we as information and product designers do to make things easier for consumers? How can we create simple, elegant devices? Or, how can we create simple, elegant decision trees for the overwhelmed consumer? Find out what they want/need in the device then show them the top three choices. Don't make them spend time searching forums, consumer reports, asking the neighbor and the barista what they did. Make the information gathering for the ever more complex devices as simple as possible, even if the device is not.
Once again, I thank Apple. There was 1 iPhone. Now there are 2. One is old, one is new. That's it. Let's make the best product and put it out there in an understandable way so consumers can simply purchase and use it, not get a stomach ulcer over a ridiculous box that will take my already lousy reception on a TV with a 10" screen and make it visible for years to come.
Posted by Janna - Customer Experience Guru at 10:02 AM 1 comment: