Where DOES that come from? 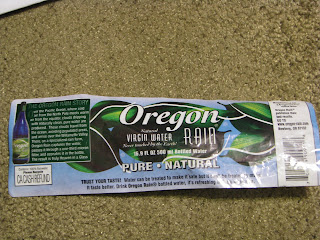 Noticed: So, I went to a basketball game tonight where they served a bottled water I had never seen. I inspected the Oregon Rain bottle and found a disturbing line of text. (see below)
Never touched by the earth? Water that was never touched by the earth? I don't understand, how does this happen? Where exactly is this water from? Was it made in a test tube?
After looking at the site, www.oregon-rain.com, it's apparently captured as it falls, from the sky. Thus Oregon Rain. But really, NEVER touched the earth? There is a water cycle last time I checked and most of those particles probably hit the earth at some point in the last 1000 years. Either way, it's just plain bizarre that their slogan for water is that it never touched the earth. Isn't touching the earth a good thing?
Posted by Janna - Customer Experience Guru at 10:44 PM No comments:

I have had the previous post in my head for weeks. Then just last week, I attended a meeting of medical professionals. I'll preface this with the fact that I am a designer. I woke up Monday in a good mood and thought I'd wear a nice bright orange jacket, one of my favorites.

The meeting was for medical professionals and was a group I had never attended before. I walked into a veritable sea of grey, blue, black and dark muted tones. I also walked in late. The orange was quite the bright beacon in the muted sea of professionals. I would say I will know better next time, but I would probably do the same again!
Posted by Janna - Customer Experience Guru at 11:55 PM No comments:

You walk into a meeting. You sit down, do you notice anything? Have you ever noticed that, quite often, there is actually a color theme to the room? Do you and your co-workers tend to wear the same colors on the same day? It's an odd phenomenon, pay attention, you'll be amazed!
Posted by Janna - Customer Experience Guru at 11:52 PM No comments: