I tweet on healthcare, usability, design and yes, I confess, sometimes the inanities of my daily life.
Posted by Janna - Customer Experience Guru at 9:44 AM No comments: 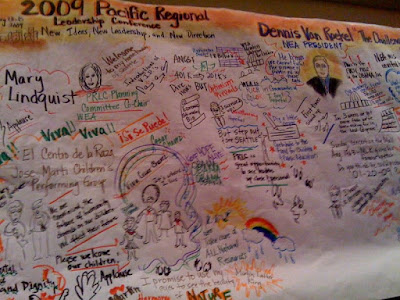 I'm attending a National Education Association conference with my partner and had the opportunity to see the keynote speaker on Friday. During the keynote, a woman stood off to the side with a large poster and a wonderful array of colored markers, and took "notes" based on an idea presented in "How to Make Meetings Work" by Michael Doyle and David Strauss.
A great tool for the designerly and non-designerly alike. She captured the children singing in the opening event, key phrases and gave life to the memory of the meeting.
Posted by Janna - Customer Experience Guru at 10:51 AM No comments:

Color Play at the Auto Show 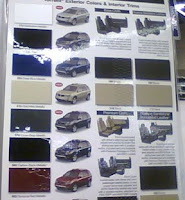 Walking through the auto show today, I noticed the only interactive piece of the entire experience (other than getting in and out of cars) were the areas where customers pick car colors. Car companies had an amazing array of ways to entice customers to engage in choosing their car color. Apologies for the mediocre photo quality of my cell phone camera.
Above is a traditional color sheet - seen in 2009. 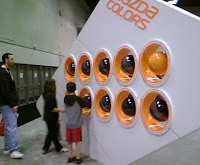 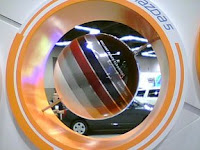 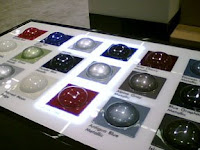 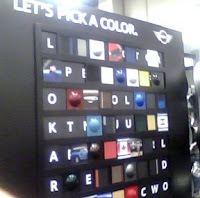 You are Being Followed

Twitter. Tweet. You are following people and being followed. I've never been very comfortable with this terminology. What user testing decided that telling someone they are "being followed" is a desirable or comfortable way of being? Last time I checked, being followed had some pretty negative connotations.
Today I "tweeted" about biomimicry and material culture as I was preparing to teach a class. Within a minute, I was being "followed" by someone I've never met, simply, it seems, due to the use of the word "biomimicry".
Out of curiousity, I tweeted "socrates, somnabulate, zygomorphic, jeroboam". So far no follows. Damn, now those are some interesting topics!
Posted by Janna - Customer Experience Guru at 7:59 PM No comments: