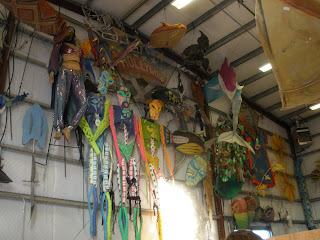 The Costume Graveyard - so colorful! 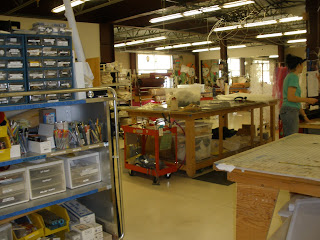 The fabric shop - how it makes me pine for making "stuff!" 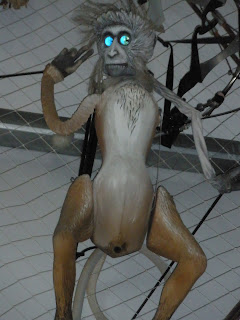 A character from the Lion King. 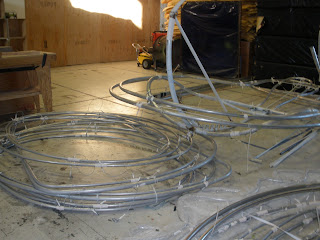 Metal tubing bent to create the legs of the bear seen at the Vancouver Olympics. Each one was bent by hand to look more "bear like". 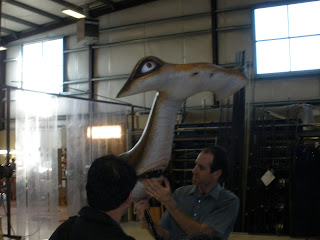 A character from Finding Nemo. 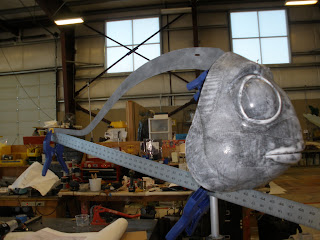 Dad-fish from Finding Nemo.
Many years ago, I had the opportunity to see Lion King. Many of you may not be lovers of musicals, but I am. It's out. It's true. I spent 7 years running wardrobe and building costumes for theaters in the east and midwest. Five of those years were spent doing all musicals, all the time at the Marriott Theater in Lincolnshire, IL.
The opening scene of Lion King was breathtaking. It brought tears to my eyes. Music, costumes, lights, a "safari" of people and extraordinary puppets surrounds the audience. It was then I learned about Julie Taymor and Michael Curry and their amazing skills at bringing fantasy to life - using people and puppetry seamlessly to create fantastical creatures.
So, I moved to Oregon and found out Michael Curry's workshop is just north of Portland in Scappoose! I recently set up a tour for the Portland Chapter of the Industrial Design Society of America and 20 of us had the great fortune to tour this creative mecca.
What was most wonderful to see, was how little machinery was involved and how much of the work is still done by hand, true artistry. Though they use CAD and other machines to assist, it was obvious that hand work takes precedence.
One of our tour guides was apparently in the left leg of the polar bear last Friday night at the Vancouver Olympic opening ceremonies! We visited the fabric shop, a sculpture shop, a metal shop, the warehouse of old costumes (not a place to go in the dark of night) and even saw the performance area they use for actors and designers to test out the puppets/costumes for movement and to learn to utilize them to the fullest.
Curry has an exceptional ability to visualize large scale designs and a staff whose talents are wide ranging - each having multiple disciplines to pull from. As for me, I just want to get lost in all of the fabric and findings and create something mystical and wonderful. Guess I'll just have to wait for his next show!
Posted by Janna - Customer Experience Guru at 11:13 AM